■[PST] 11/25/2019 22:00
[CET] 11/26/2019 7:00
Hello Pilots!
Development Director (and recently promoted to A+ Lieutenant) Kanbe here with new information for MOBILE SUIT GUNDAM BATTLE OPERATION 2.After the release in North America, Latin America, and European regions in October, we have achieved a new record for total active players! Thank you very much!

It’s been a dream of mine to hit 2 million downloads since PS3’s MOBILE SUIT GUNDAM BATTLE OPERATION (the first one) and I’m so happy we’ve finally reached this point. Again, thank you to all our amazing pilots from Japan, Hong Kong, Taiwan, South Korea, North America, Latin America, and Europe for making this dream a reality.

Now – onto more updates other than the information on the new MAP “City Ruins” that was mentioned in our previous Development Newsletter!

■Reviewing Points Gained by actions other than attacks
In addition to the scores gained by fighting other MS, there are two other actions that allow you to gain points.

The first is “destruction of the base” and the second is “controlling Waypoint base.”

Both are important tactics when it comes to map control and influencing the other team’s actions as the match progresses.

However, we noticed that even though these actions provide a positive benefit to the team, players don’t enjoy being the one tasked with doing so. And with the importance of individual performance for ranked points, players were reluctant to take on these non-combat objectives.

In order to address this, the following changes are being implemented in an effort to give more agency to the players who take on these non-combat tasks.

Not only does this prevent enemies from regrouping, but prevents enemy requests for assistance. This increases the importance of relay points and reduces the score of those who leave the battlefield.

■2. Review of score for “Base Destruction”

・Before:
Individual Points Calculation when a base is destroyed ＝ Total Cost to Enemy Team ÷ Team Size

The success of base destruction is not only the result of the person who planted the bomb, but also those who defended them, so the calculation should more accurately distribute points for base destruction.

We have tried to accurately reflect the calculated risk of attempting to plant a bomb at the enemy’s base.

Please note that this change was not made to emphasize planting the bomb but rather adjusting the point distribution for doing so.

NOTE:
・Total Score for destroying a base has not changed.
・If a base is destroyed by a direct attack, the points are still distributed based on damage done per Player.

Warning: Lots of tables and numbers below.

First and foremost, the purpose of this change is

This change does not significantly impact game play and is more of an analytical look at the changes.
Be sure to check out the next section for more fun updates!

Again, this section is to provide insight on our changes to the system as we believe Players can provide better feedback when they are equipped with the right knowledge and information.

The following is the very detailed information for those who are interested.

Based on the old system, rankings were an accurate representation of the overall contribution of an individual but when trying to more accurately determine an individual’s skill, problems became apparent.

For example, let’s compare the results from 1st Place [A] and 2nd Place [B]

[B] has nearly best results in every category, except for “Diversion” and “Pursuit Assist”, getting placed below [A].
But compared to others [B] has scored a lot from assists or damage given, which shows his high contribution.

Looking at 6th Place [G] you’ll notice that their Pursuit assist score is overwhelming above the second closest score however their overall rank is 6th.

In both examples you’ll notice that the even with significant contributions to certain aspects of play, a Player’s ranking was only judged based on their overall ranking.

To improve on individual rankings, we are changing the calculation of Overall Ranking to:

With the above changes active, the rankings look like this:

The approximate ranking remained unchanged, while pilots’ ranking that does not match are replaced.

Overall, we believe that this provides a better example of “overall contribution” when trying to assess a Player’s performance. That said, there is always room for improvement, and we will be keeping an eye on this new rating system.

The calculation will be done internally, so there is no need to worry about the calculation while playing. Current individual ranking and overall ranking will be displayed in the results screen.

For Players interested in seeing their “Standard Results” scores for each category, press Square (□) at the results screen to see your performance breakdown. 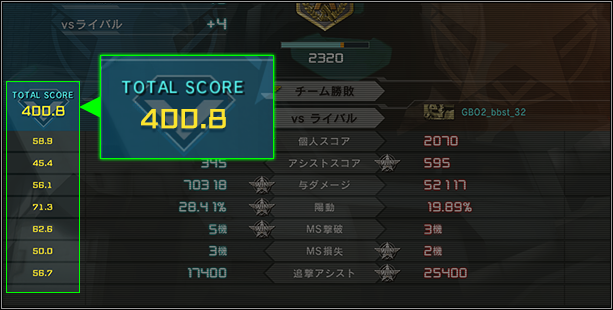 [CHANGE] Updated Button Input
The following information is a guide to the updated control inputs for pilot’s actions.
We highly recommend you read this as it will affect your game play.

In an effort to reduce accidental actions, we have made slight changes to the controls.

In situations where there is a Press and hold, you will now use the Square (□) button.
*While scoped or during other specific actions, the special action takes priority.

In situations where you can perform two special actions, you will see an additional display with the available options.

You are now able to select an action with the input button without moving from your spot.
We understand this may be initially confusing, but we hope that after initially trying it out that you will enjoy.

Additionally, we made one more change.

The default operation to access “Ally Info” was to press the “L3 button.”

There are cases where players press the L3 button too hard and accidentally turn on the window.
Changes:
■[New] New Skills and Updates coming in NOVEMBER!
Take a look at a new stone throwing skill coming to MOBILE SUIT GUNDAM BATTLE OPERATION 2 in the near future!
*This feature is still in development and may look different as development progresses
In addition to a new skill the flight type will soon join MOBILE SUIT GUNDAM BATTLE OPERATION 2!
More information coming soon!
[Event] HAPPY HALLOWEEN 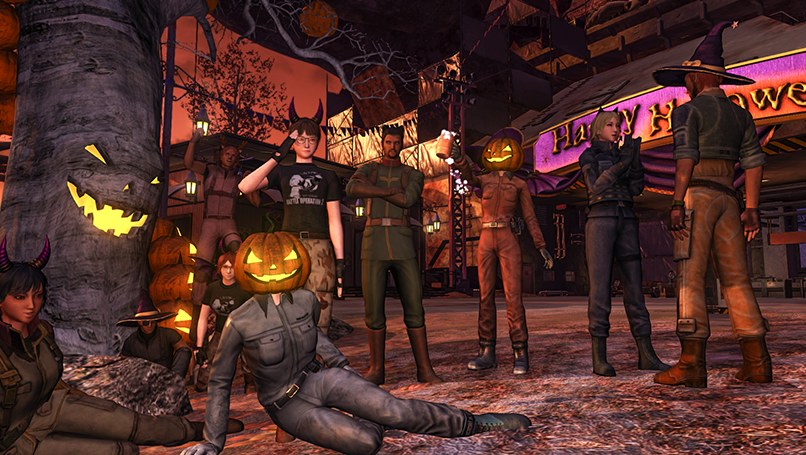 Enjoy Halloween-inspired decorations all around Base Camp as you take on this year’s Halloween Mission!

Did we mention that there is also an amazing MS REWARD for completing this year’s Halloween mission?

This MS is available to everyone who completes the limited Halloween missions!

One bonus addition coming this patch is Hide UI Mode!
Available only in the base camp at this time, Players can take some awesome screenshots while hiding the in-game UI.
(Currently limited to the base camp only)

Be sure to take a lot of screenshots in new Halloween-only gear and upload them for us to see!
*Camera mode only functions to hide the UI, so please use the PS4 screenshot button to take screenshots.

To celebrate the new camera mode, Tenda has her own unique Halloween event too!

She’s scattered Goggs throughout Base Camp and if you find all of them in camera mode, you will be rewarded with an extremely cute Gogg pilot avatar item!

As always, thank you so much for your continued support! We hope you have a ton of fun with the incoming update and be sure to stay tuned for even more updates coming in the future!