We’re using the same monitor in our office to make sure that the color shown on the actual console is the same as the version during development.

Using the same monitor and remote control, I believe that you’re also aware of the strange phenomena that sometimes occur.

Just recently, as Mr. Kanbe said “Good work!” and left for the day, my TV suddenly turned off…
It seems like the more you concentrate, the more it gets worse. And you think, “What the-?!”… Then it suddenly crosses your mind.
The time when your parents turned off your TV and said “Stop playing games and eat”…

Funatani here… it’s been a while.
Working one hour a day, as desired.

Let’s get down to business! I’m informing you on MAP-related information scheduled to be released in late October’s update!
First of all, we will report about the adjustment on the infantry respawn position.

Infantry Respawn Position Adjustment
Until now, the respawn position had been set with the following in mind:

1: Respawns near a base or waypoint base.
2: Respawns facing the way to go.

With that in mind, we have made these adjustments to address the issue:

The are many impact sites that don’t respawn you facing the direction of the waypoint base which can get rather confusing.
Personally, I was always confused when requesting for support and MS at point A and D, so I think these adjustments will be more effective.
▼MAP “Impact Site”… Adjustment of waypoint base A

The central point of the desert in the current version has some good points, such as allowing for MS to be released easily, so we had a difficult time deciding what to do. But in order to prioritize and streamline more understandable settings, we made the adjustments to address players get stressed trying to find the waypoint base.

In addition, the respawn point on C was also changed to the upper side of the slope.

In addition to the above changes, all infantry respawn positions have been adjusted.
We feel that it’s now easier to take actions after respawning on EVERY map.We are also excited to introduce a new MAP called the “City Ruins”, which has been teased in various places (we never thought that it would make it into a PV video…)
City Ruins
The City Ruins is not the same as in the previous title, so feel rest assured as it’s going to be completely new. 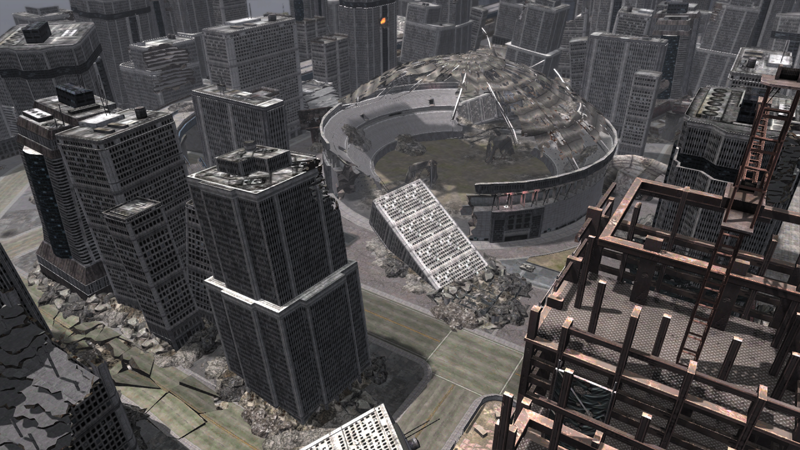 ・Create a “Symmetric MAP” that has yet to be seen in-game.
・Changes in gameplay for “Securing waypoint bases or advancement on the main battlefield.”

Let’s take a closer look at the changes:

Let’s take a closer look at the changes:
The area is about the same size as Deserted City and the distance between bases is around 1500m, but it doesn’t feel that big due to many roads and obstacles in-between.
The central dome is symmetrically placed between two waypoint bases, so it can easily become a main battlefield. 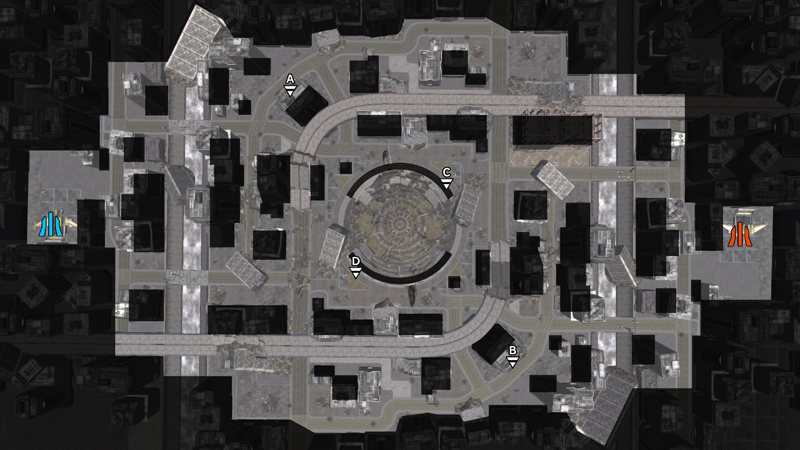 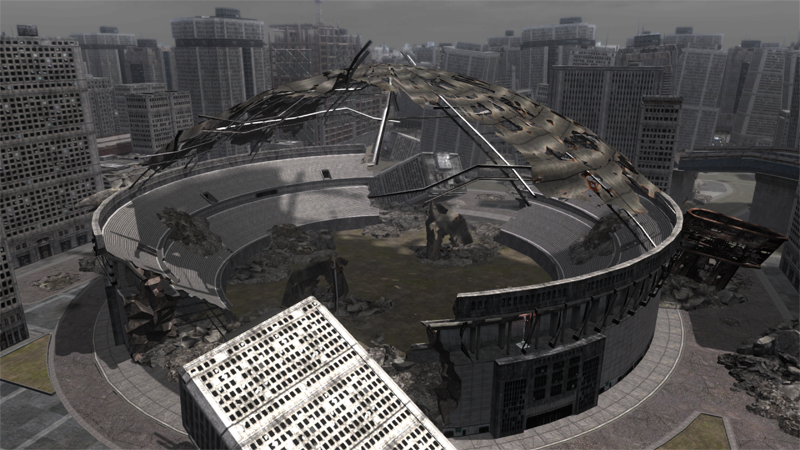 Although it is a flat MAP like Deserted City, there is a highway placed on the main battlefield, which allows for three-dimensional gameplay.
However, you should be aware that the central dome is not placed on the top.
It can be advantageous for support units, but there are many points that can be accessed without jumping on hills (or similar) by assault units. 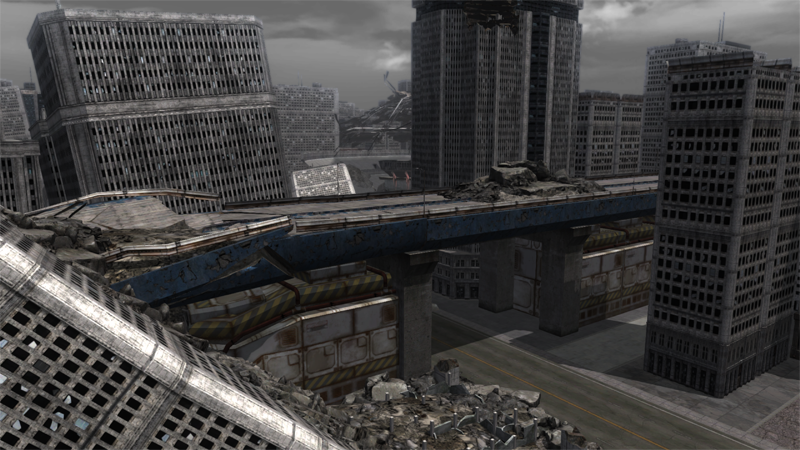 ■Impressions and feedback received from testing
While City Ruins was still under production, some players participated in testing the map during the 2nd GPG Strategy Conference in September.
During the testing we received comments such as, “I don’t know in which direction to go first,” “I got lost,” “I got stuck,” and “The MS lands too far from requested point.” We’ve done the following to address these issues:Regarding confusion over the direction of travel, the spawn points were designated strategically, with A and D on left and right sides of the MAP. However, due to spawning on left and right sides right of the bat, there were many comments on how it was difficult to understand where to go, so the points were moved closer to the starting position with 3 units on each side of the bridges.

To avoid getting lost, concrete barriers and landmarks were added to places with wall edges that are hard to see.

On the highway, colors of enemies and allies were changed to red and blue respectively, so one can see which side they are on. 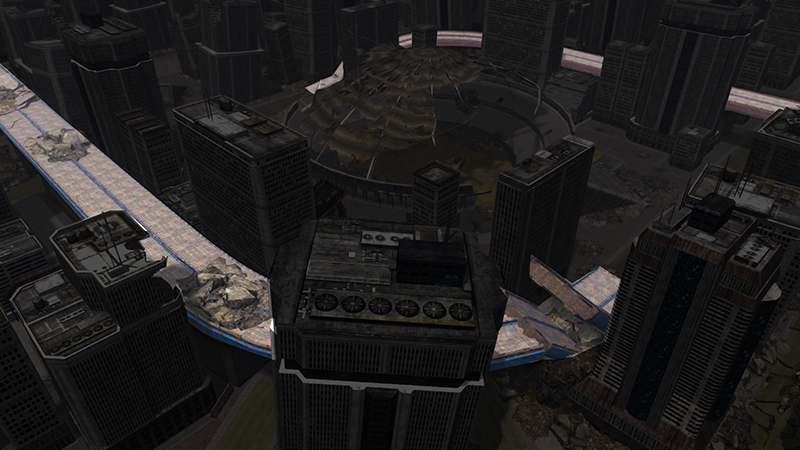 The issues dealing with getting stuck and MS positions being too far away have been adjusted accordingly.
■How to play
Since the sortie starts from the point where 3 units on each side are spawned, the strategy will change greatly depending on the junction point as well as controlling waypoint bases and the enemy.
In addition, the number of enemies may change, allowing for more fun in finding the appropriate solution based on the situation on the battlefield.
▼Example… Junction at waypoint bases A, D and B, C after suppression. 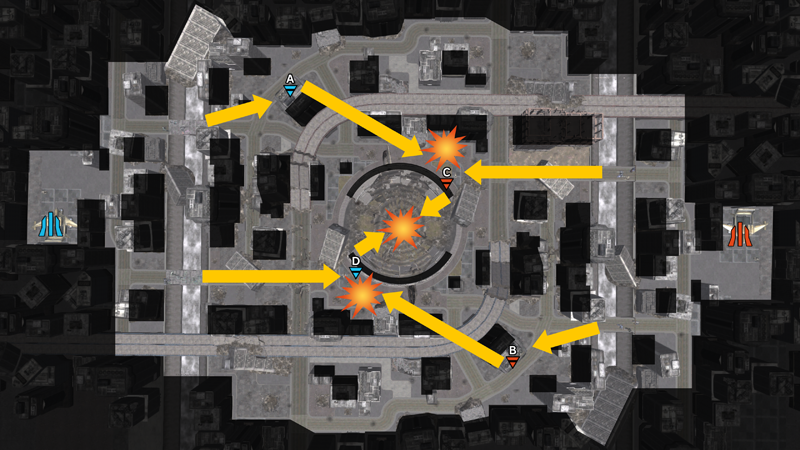 ▼Example… Assault at waypoint base C, aiming for the advantage in numbers. 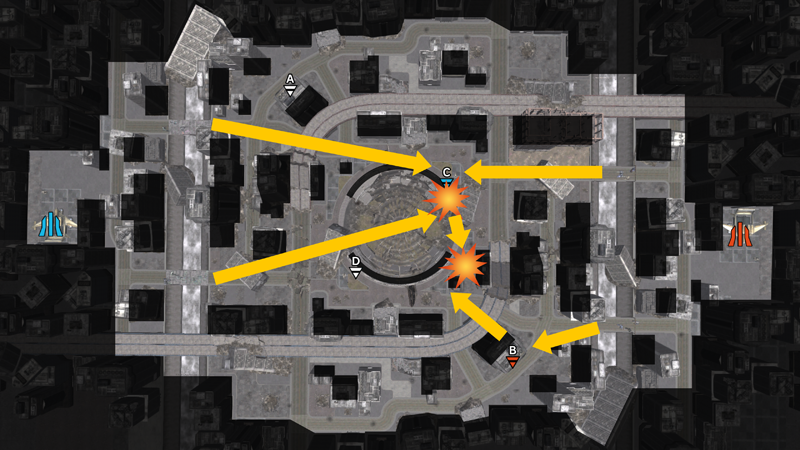 ▼Example… Everyone joins the waypoint bases D and presses the attack. 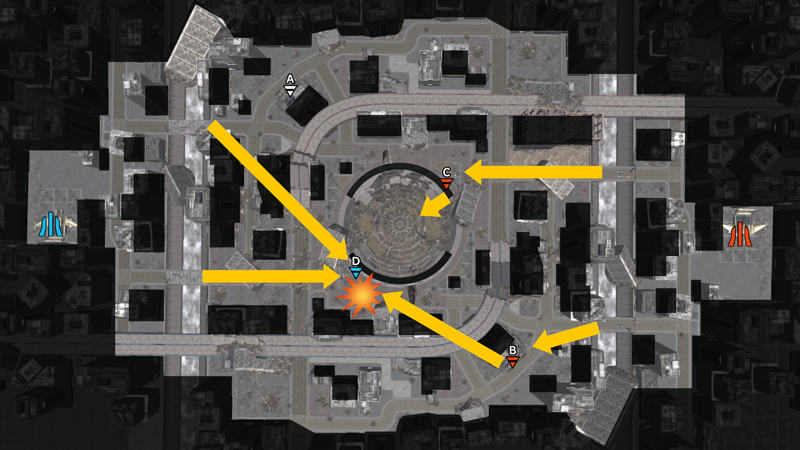 ■Closing
This is all for now. (Since it’s a quite long blog, you can just keep looking at the image.)

In the next development blog, we will report on other implementations from Kanbe, so please look forward to it.