It’s finally Fall, and it is getting cold day and night. We all should take care of ourselves and watch out from catching a cold.

As winter is coming, I want to share some hot clan-related information to warm you up!

■Clan Match
The features hinted at by Development director Kobe was about
Clan Match and it’s finally starting!Even though there are players who already used “invite” option to participate with clan members, there were cases when there weren’t enough people for team composition, so matchmaking was done including players of single sorties.Now I would like to introduce “Clan Match”, where matchmaking is done with clan members in
“clan vs clan” matches. Let me explain about “Clan Match”.
■What is Clan Match
It is a limited time event with clans competing for ranking.
The ranking of the clan is based on the amount of “CMP (Clan Match Points)” that can be obtained by taking part in a “Clan Match”.There is already a “Ranked Match”, where individual players compete with each other, whereas “Clan Match” is set up as a match with clan mates against teams of other clans, so it is constructed differently from “Ranked Match”.
■The ranking is only for “Clan Match Overall Ranking”
The “Ranked Match” had a “Group Ranking”, which included groups of 20 players and “Overall Ranking” with all pilots, but in “Clan Match” the “Ranking” will be “Clan Match Overall Ranking”. 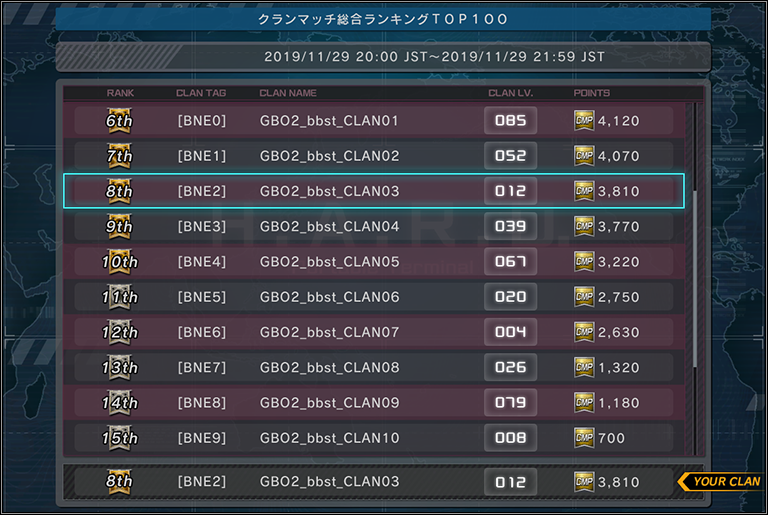 As with ranked matches, we also considered combining the “Overall Ranking” and “Group Ranking”, but the clans can be composed of up to 30 members, making the entry amount minimum of 1/30 compared to ranked match. In “Group Ranking”, the ranking is based on pilots’ ranking in groups, while the clan have members of varied skill, making it difficult to make fair grouping by clans. So, it was done in following manner.
■Obtaining “CMP (Clan Match Points)”
Clans can earn CMP by taking part in “Clan Matches” (not earned individually like in “Ranked Match”) during the event period and the ranking is made on top three totals.
So regardless of how many sorties there were, 3 or 20, only highest CMP earned from 3 sorties is added to the ranking.
There can be up to 30 members in the clan and with teams of 6, there can be 5 teams from the same clan participating at the same time, but still only highest CMP earned from 3 sorties will be added to the ranking

However, clans with a lot of members will have more participants, giving advantages in a way that it can increase the chances of obtaining high CMP from matches.

■Formula for obtaining CMP
Let me introduce the formula of CMP that can be obtained by making a sortie.
This is also similar to the rank match specifications and I will explain in more details

“5% of team score” as CMP: earned by all teams in the battle
Example) A team score of 12000 → +600 CMP
This is the same specification as the rank match, and CMP will be added depending on the score the team has earned.
*There will be an upper limit on the amount of CMP that can be obtained from the team score.

As explained earlier, the matchmaking in “Clan Matches” is done based on individual ratings and not group ratings.

*Please keep in mind that the CMP described here is provisional and may change prior the event.
■Clan Match Ranking Reward
To commemorate success, clan match flag will be awarded to clans in high ranking spot in the Clan Match Overall Ranking.

Each time a clan acquires a “Clan Match Flag”, it will be accumulated to represent honor. 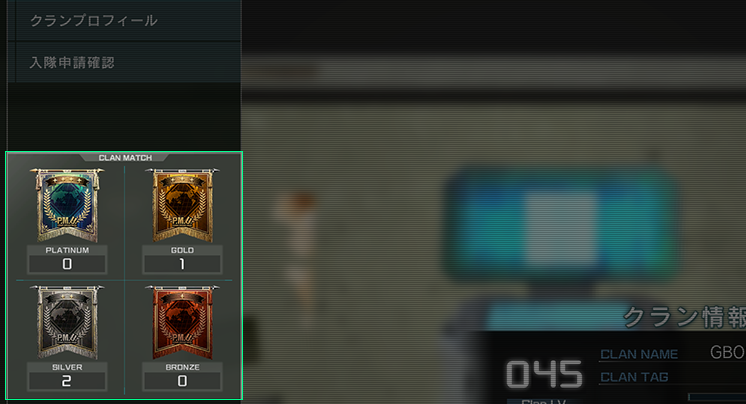 The total number of “Clan Match Flag” earned can be checked from the “Clan’s room” and “Clan’s Terminal”.

In addition, rewards will include Mobile Suit only obtainable from clan matches s a winning prize to all clan members of the clans that won Platinum Flag (Top 1st to 3rd).
*Please keep in mind that those mobile suits will be added to the Supply Drop after a certain period of time.

Stay tuned for further information for the obtainable Mobile Suit.

■”2 hours short matches” will be held regularly every week!
It is the biggest feature for “Clan Match”. However, unlike other events such as “Rank Match” which is being held over several days, “Clan Match” is only opened for “2 hours” and will be held
regularly every Saturday from [PST] 3:00 to 5:00 / [CET] 12:00 to 14:00.
The Mobile Suit winning prize will be replaced every two months.
*Those Mobile Suit will be added to the Supply Drop two to three months after the replacement.*Although it is dependent on the month, the chance to obtain them from Supply Drop would be around 8-10 times.It goes without saying that the clans who had won the Mobile Suit will still have the chance to obtain them multiple times within the 2 months period. So, let’s participate in the matches again and strengthen your unit!

Let’s focus on the short period battle!
Ranking will be decided shortly after end of event!
More importantly, it is held regularly every week!

We aim to create an event with such a sense of speed.

■Additional Precautions
There are necessary precautions to be informed before participating in the “Clan Match”.

●Clan with number of participants less than the minimum requirement set in the regulation will not be eligible for participation.

In “Clan Match”, it is required to sortie as a clan member. Hence, in case a clan did not meet the requirement minimum number of “participants” as stated in the regulation, team cannot be created, and you will not be able to participate in the battle.

We understand that it will be a difficult circumstance for clans with a few members, but as this necessary is for realizing “Clan VS Clan”, we hope for your understanding.

Since there is still time until the event, please recruit more members!

●You will not be eligible for participation in “Clan Match” if you join a new clan during a clan match period.

We devise this method in order to prevent acts of joining clan during the end of event period, only to receive rewards. Please understand that rewards from “Clan Match” are presented as an honor to members of the clan.

As “Clan Match” is a professional competition where clans fight each other, and due to its characteristic of a short-time event, we really wanted to emphasize the importance of higher level of manners. Therefore, players with penalties are strictly prohibited in participating this event.

■Closing
Soon, “Clan Match” will be available as a new trial for the game. But before that, we are planning to conduct a β test ahead of the release so that everyone can have the greatest experience.
*The contents of the reward receivable may change in the β test version.
Details of the β test and the schedule will be announced on our official website.
Thank you very much for your cooperation!
- Clan Supervisor Ozawa